Hello there and thanks for joining me today for the reveal of our son’s teen boy bedroom makeover! It’s kind of an eclectic mix of vintage, thrifted and industrial, with some DIY mixed in! His favorite piece is by far the vintage metal gym lockers, and the new platform bed. 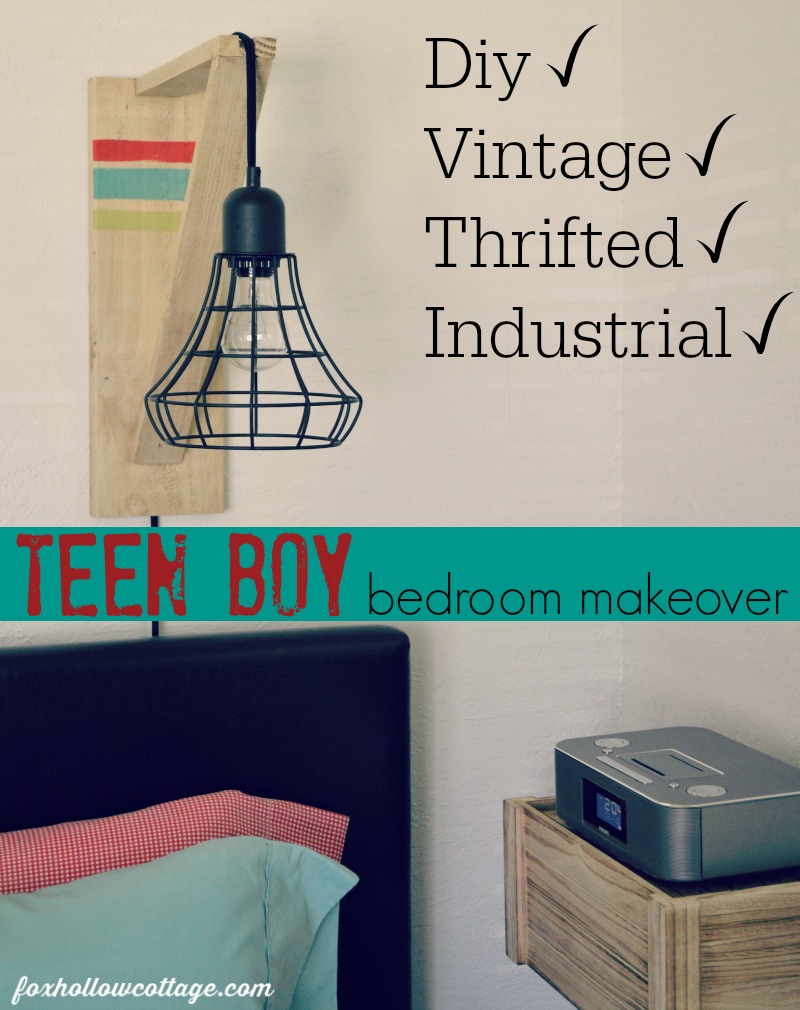 A few months ago, I got the bright idea to redo my sons bedrooms. It was a bit of an undertaking to get here for us, because we decided not only to make over Austin’s room, but to completely flip the location with another room in the house, my home decor storage room. We have a modest sized cottage and let me tell you we made a big, fat, giant mess doing this. It wasn’t completed on magical “TV time” or over weekend, or even a month. Because real life is going on over here!

You can see the beginnings here of you want to catch up. 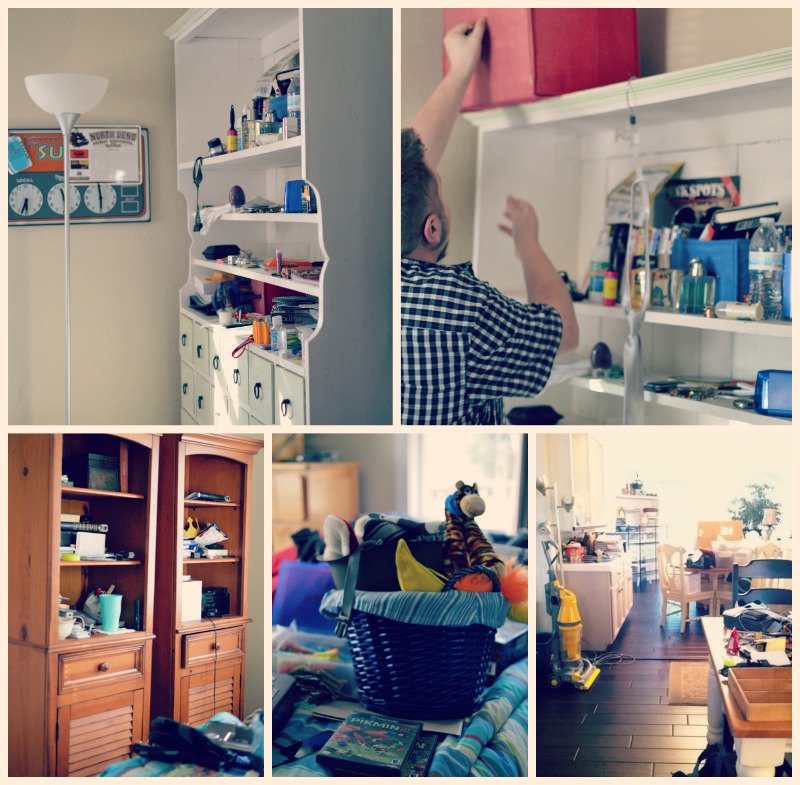 We started by removing everything from Austin’s room. We needed to completely empty it in order to get it ready to house my home decor and seasonal items.

You can see the new decor storage room here.

With all the home decor settled… 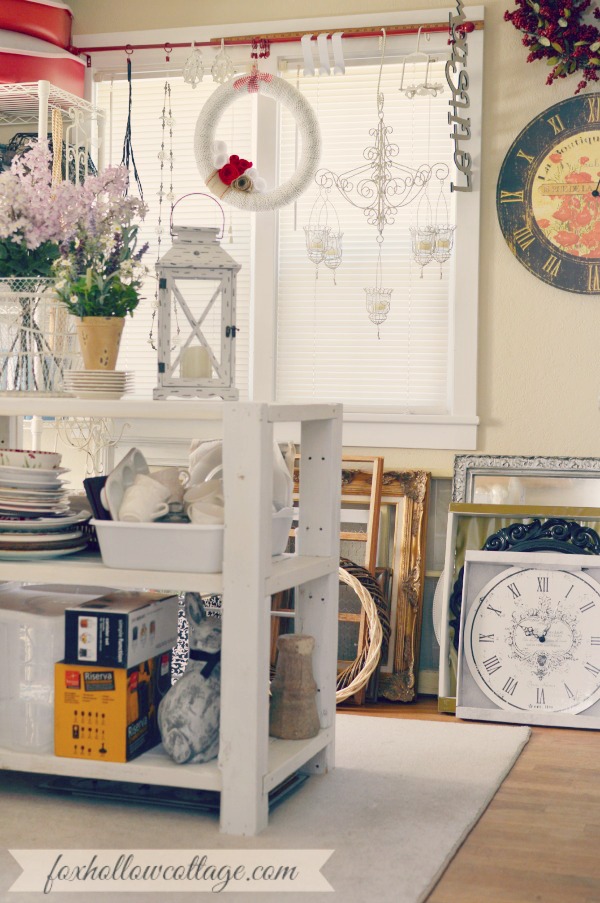 Austin’s new room was empty and ready to be worked on!

We wanted a clean slate so I filled the zillion nail holes from all the mish-mash shelving and painted the whole room and all the window trims. I used the same color on the walls and trim as I did on the rest of the upper floor last Summer before we installed the new floors.

Speaking of which, we debated putting the wood floors in that room too, but since it was just pretty much a storage room and I soooo did not want to move the 90 kajillion things that were in there, we skipped it.

Austin prefers the soft carpet though and it’s like brand new so I guess it worked out in the end. 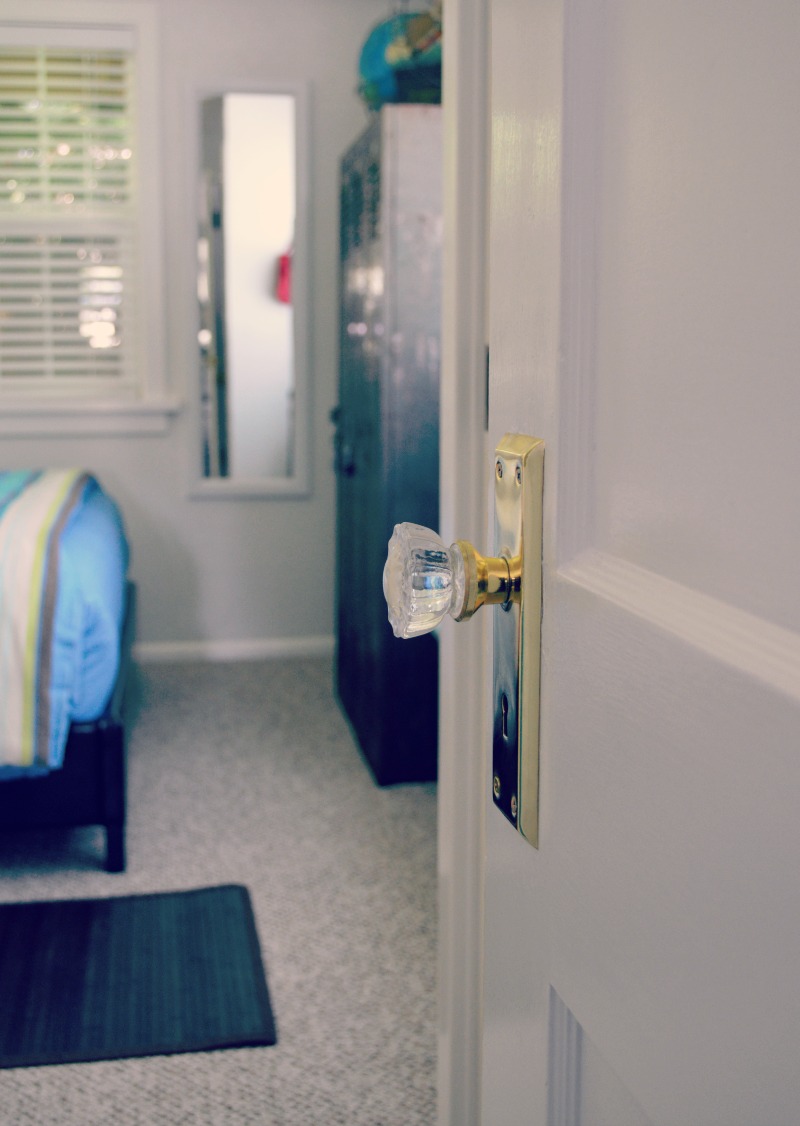 When I first approached Austin about making over his room (this kid hates change) he was surprisingly open to it. When we threw in changing rooms, he was all over it! I made him promise to help with all the work that a flip would entail and he did not shirk his duty. He was a big help to me ferrying things from one room the the other.

When it came time to shop for items, he made such smart choices. I was really proud of him for selecting really useful items. The smartest of all was the new platform bed. You can read about our experience putting it together and more about it in the sneak peek post here. I can’t say enough good things about this bed frame and the price was super reasonable. It was a teeny bit hard to not get distracted while shopping for Austin’s room. I kept finding cute stuff for other rooms in the house on accident!

Austin’s new bed is hands-down, his favorite thing in the whole room! 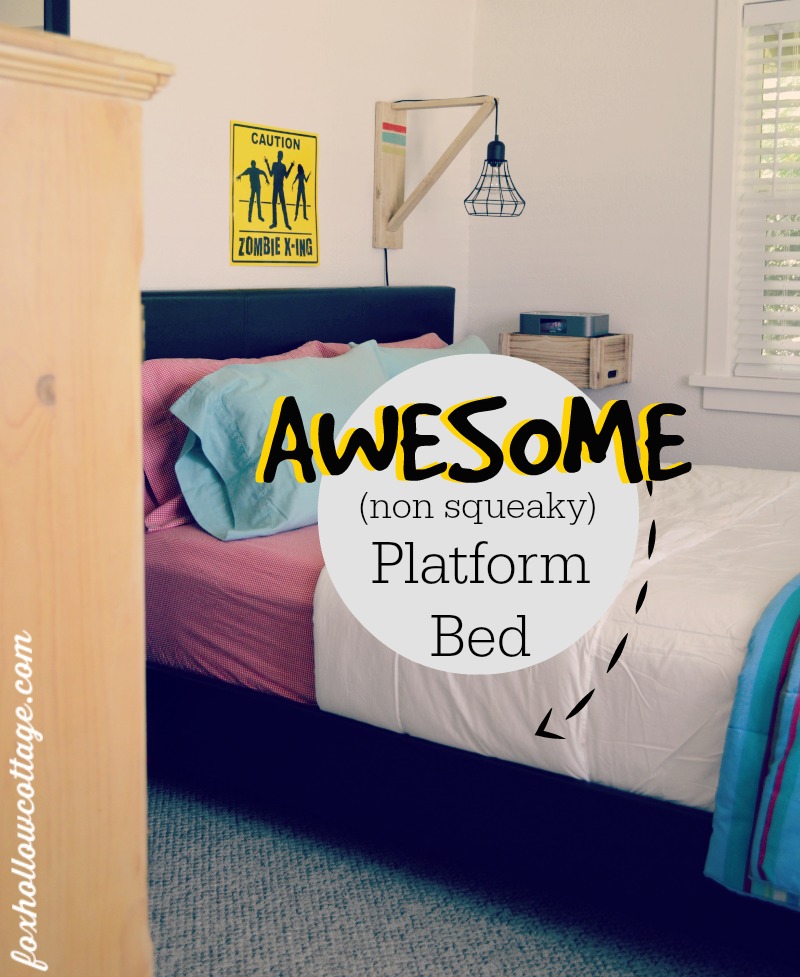 Next would be the vintage lockers we lucked into. 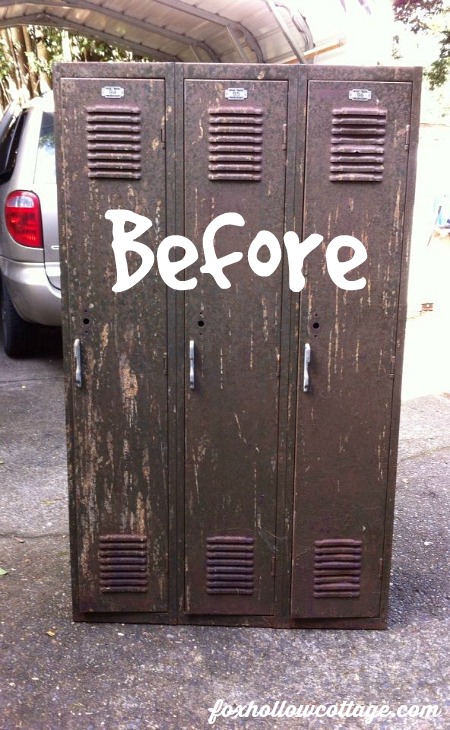 When I asked Austin what sort of things he might like for his room, besides a non squeaky bed, he asked for lockers.

We never expected to find any, especially in our price range (le cheap), but a friend tagged me in a Facebook post one evening sharing a set of lockers, right here in town at a local antique mall! Jim and I raced down the next day and bought them when they opened.

Austin power washed and scrubbed them clean. He liked them as-is, color and all, so nothing further was done to them. 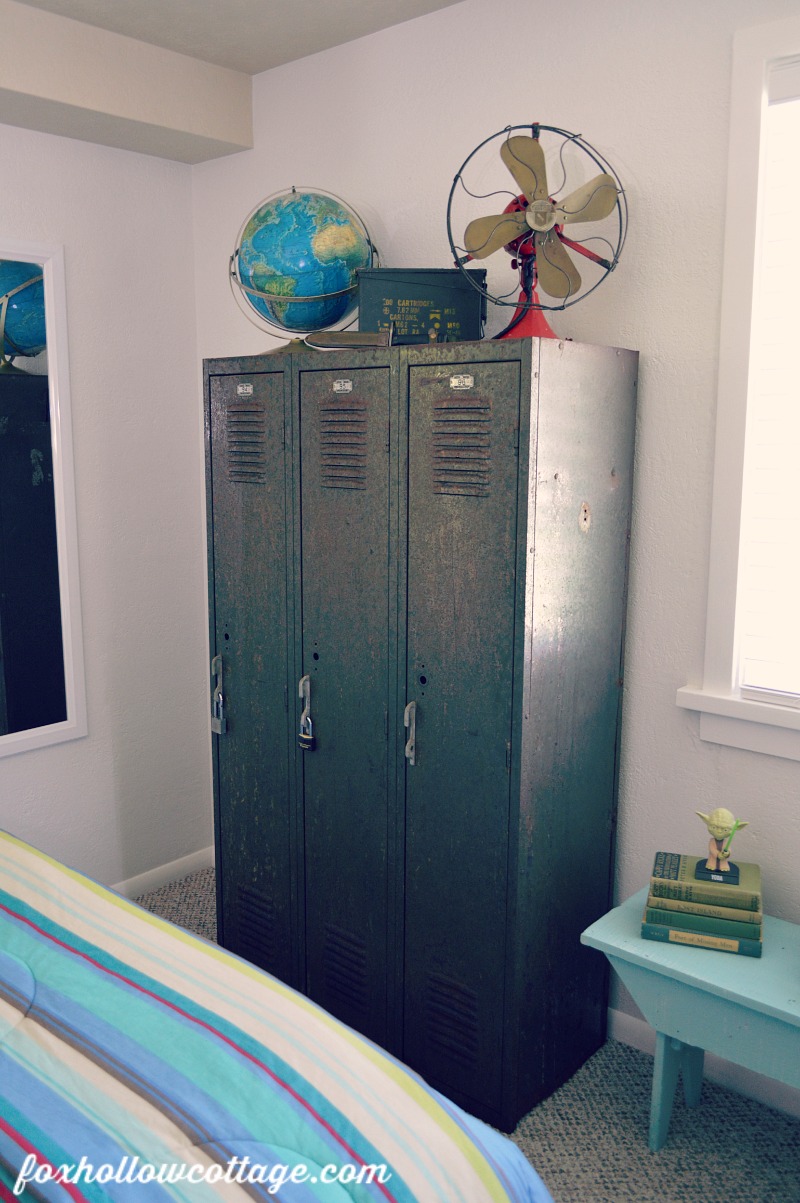 While we were buying the lockers Jim found this super neat vintage fan.

So we bought it too! 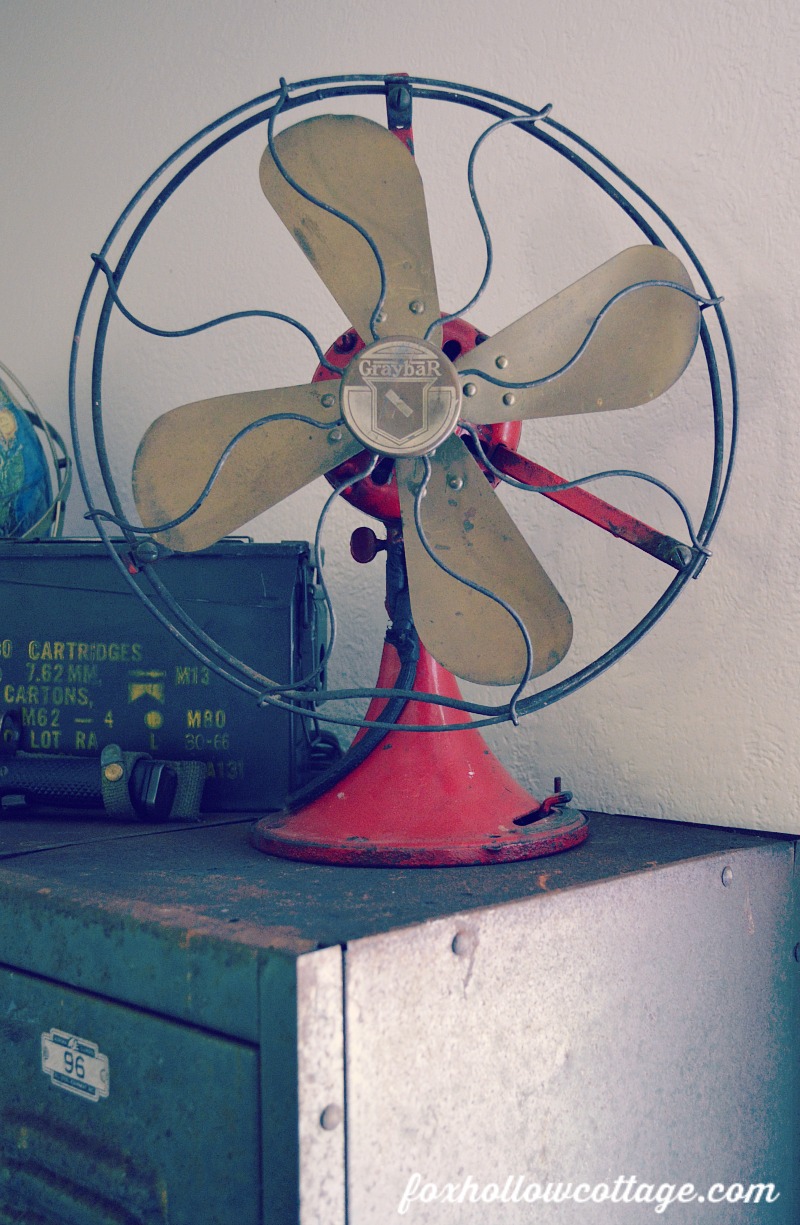 After the lockers had dried in the sun, and the boys carried them up to the new room, Jim walked in and set it on the lockers.

Hello? I had plans for that.

It really looked at home though.. so there it lives. 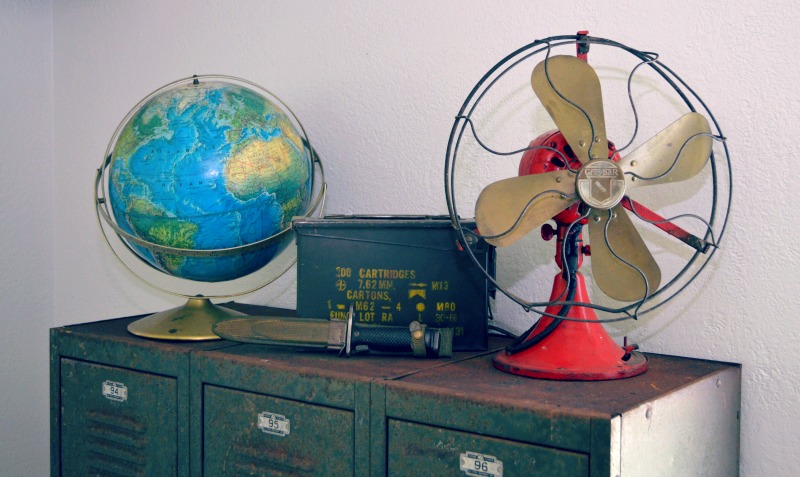 With my globe that Austin took a shine too.

Nestled in between are his Army surplus finds.

He is all boy. 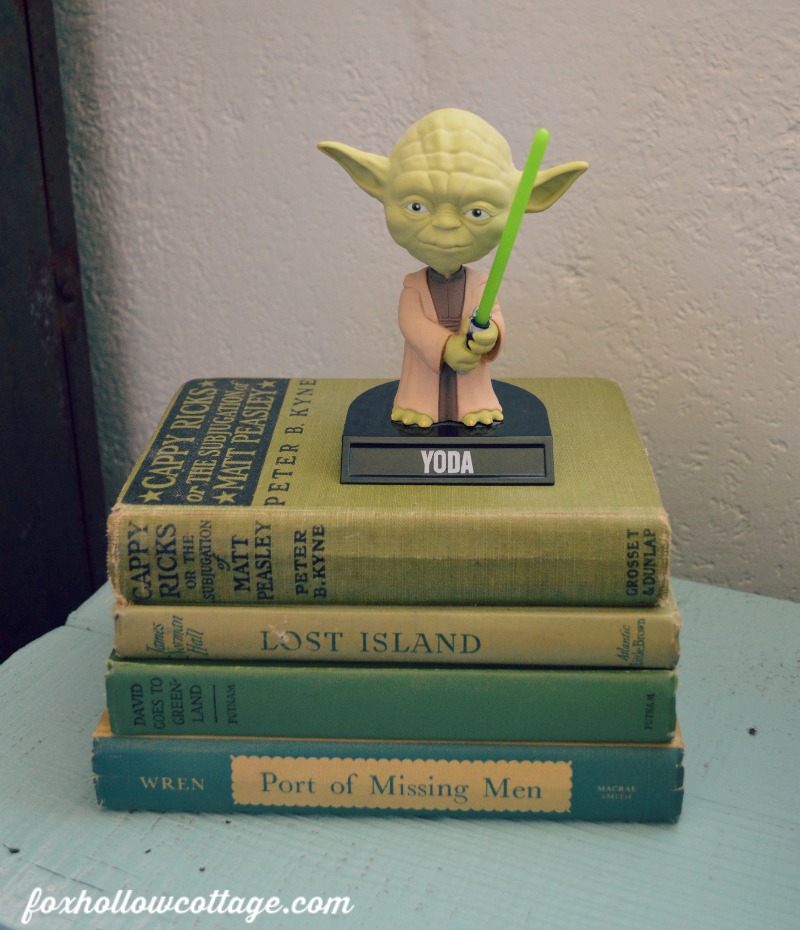 The room is not really large, so taking pictures was a challenge.

Between the door and the lockers there is a double set of windows, under it rests a book bench.

That is a bench, with books on it.

It’s a perfect fit under the window and filled with said books and special things Austin loves. 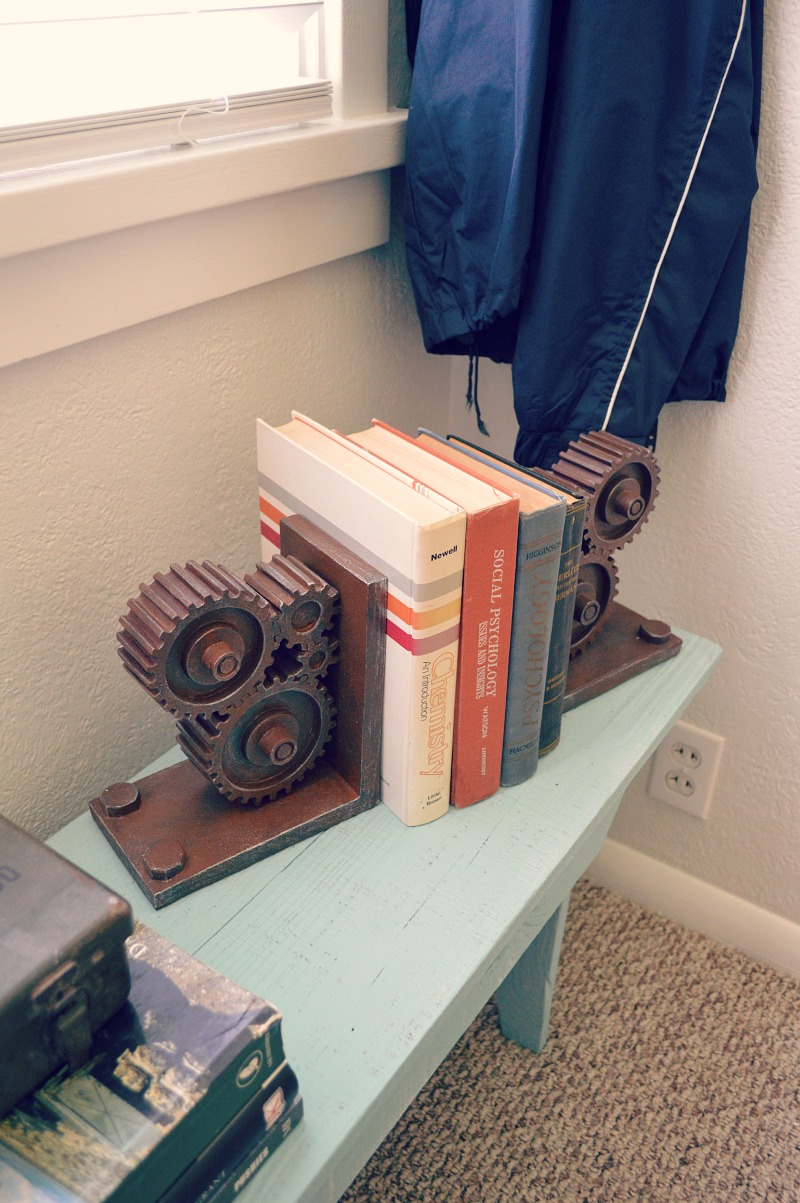 And these industrial gear bookends. Austin will always read and these bad boys are heavy.

They actually hold the books up, not the case with some bookends I’ve run across.

And just fyi, the books are not props. Austin bought them all on his own.

In fact, I was not even with him. 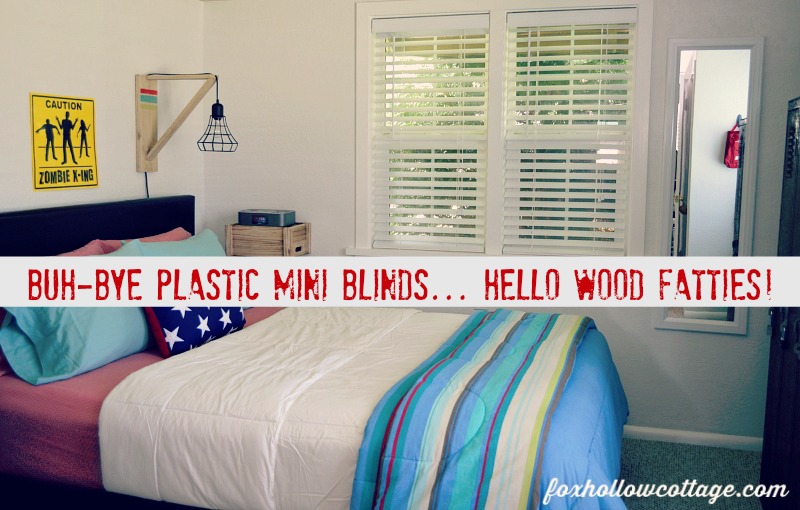 Yep, we are on a plastic mini blind annihilation mission here at the cottage. And proud of it!

Since these windows are only 23 inches wide they were really cheap to dress with new blinds. (whew)

Now for one of my favorites! 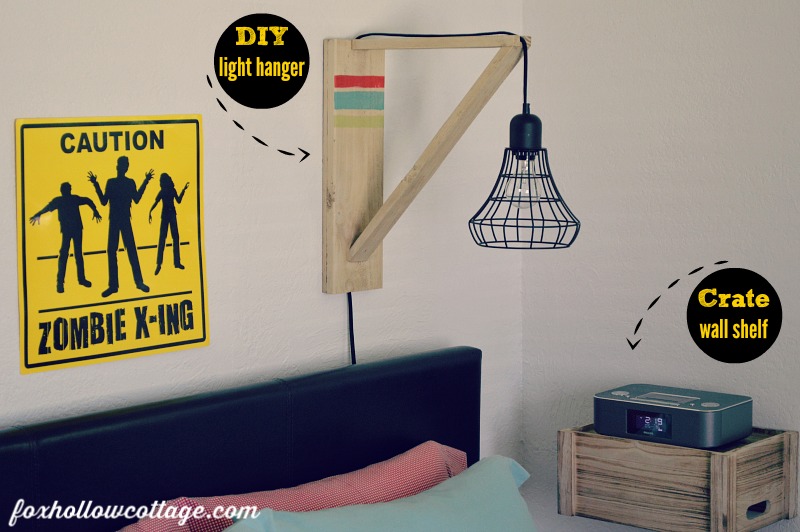 Austin needed task lighting for reading in bed, but we had zero space to work with. So we climbed the wall.

– You can find our solution and the simple diy tutorial on how to make a $2 pendant light wall hanger by clicking here. 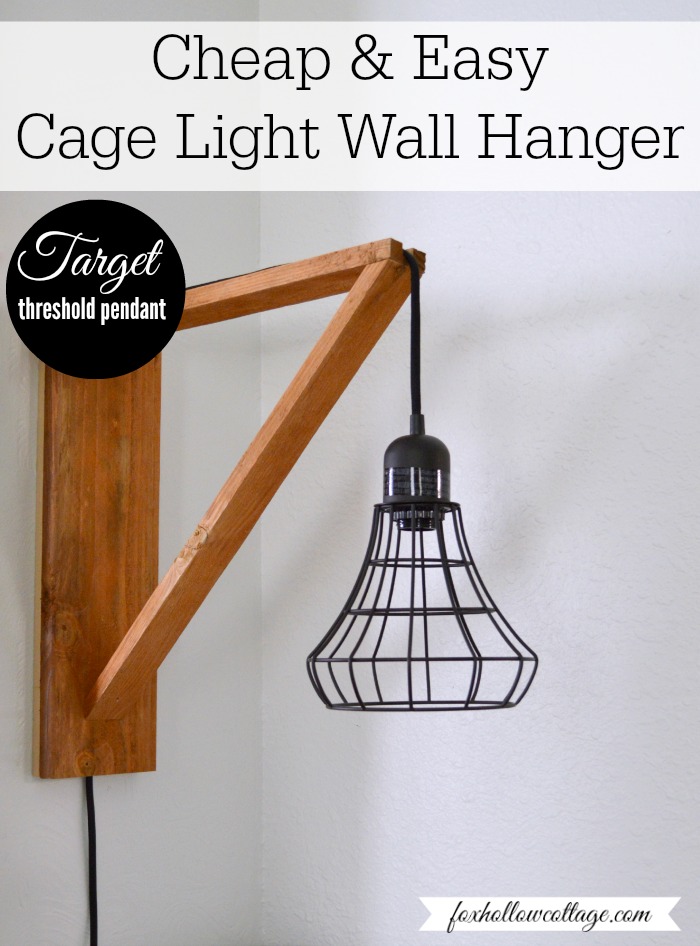 I painted it Maison White and added Cerise, Riviera and Chloe Stripes, then finished with dark wax. I pulled the colors from the comforter, the fan and the globe in the room. (more on this later and why this makeover is titled “part one”)

To hold his alarm clock and have it easy to get too, I screwed a light weight decor crate right into the wall. It couldn’t have worked out better. It acts like a floating shelf and the lip holds the clock securely so it can’t slip off when the snooze is being pushed. Repeatedly.

I think Austin and I would agree that this was his splurge item for the room. 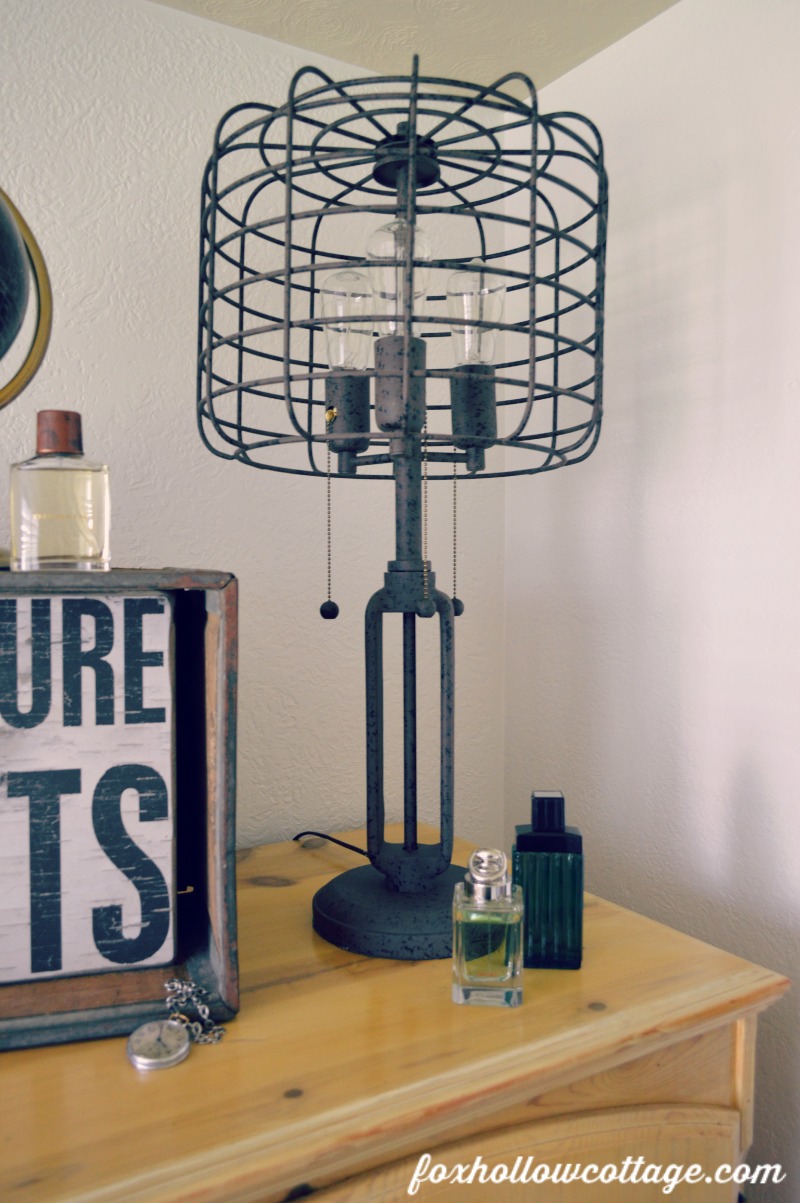 This industrial cage light caught Austin’s eye right away. He was having trouble deciding between this and a 3D Printed Photo Lamp. I personally think the photo lamp would’ve been better but it’s his lamp so it was his decision! I might have to get a photo lamp for my bedroom instead!!

I totally got it. I still think that it’s was cool. You can find them in floor lamp versions too, which is equally as awesome. Lamps can really help transform a room. I’m very picky when choosing a lamp but I think he did a good job.

He did indeed need a main light source, as there is no ceiling fixture in this room, so we went for it. It’s plugged into the the outlet that is activated by the switch at the doorway to the room, so it works wonderfully! 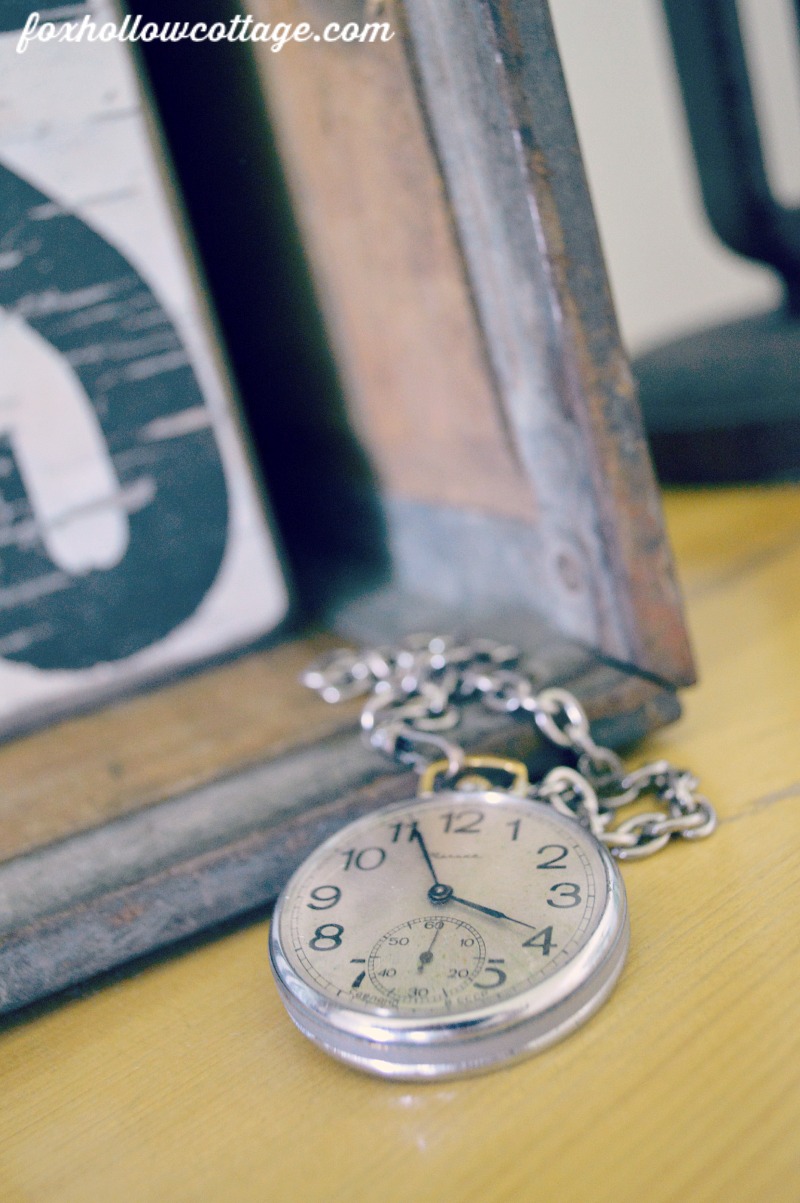 Pocket watches to be precise. 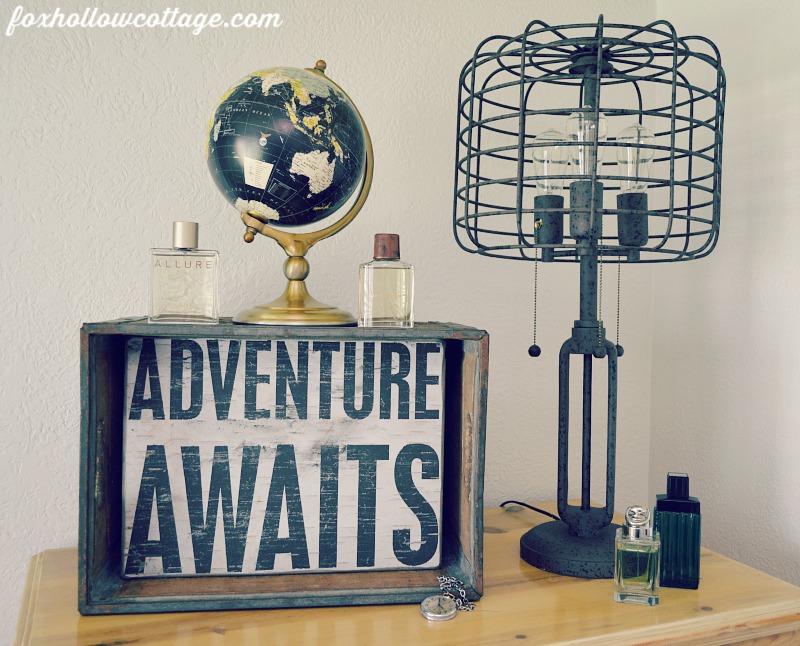 And my old, vintage crate.

When we talked about doing his room, I told him he could borrow my crate. We were going to try for a rustic/industrial feel.

You can see he has another globe too.

I bought that for myself. Sort of to take the place of the vintage one I lost in here.

When I brought in in the house, Austin said; “Oh that is cool mom! Is that for my room too?”

Of course it is honey. 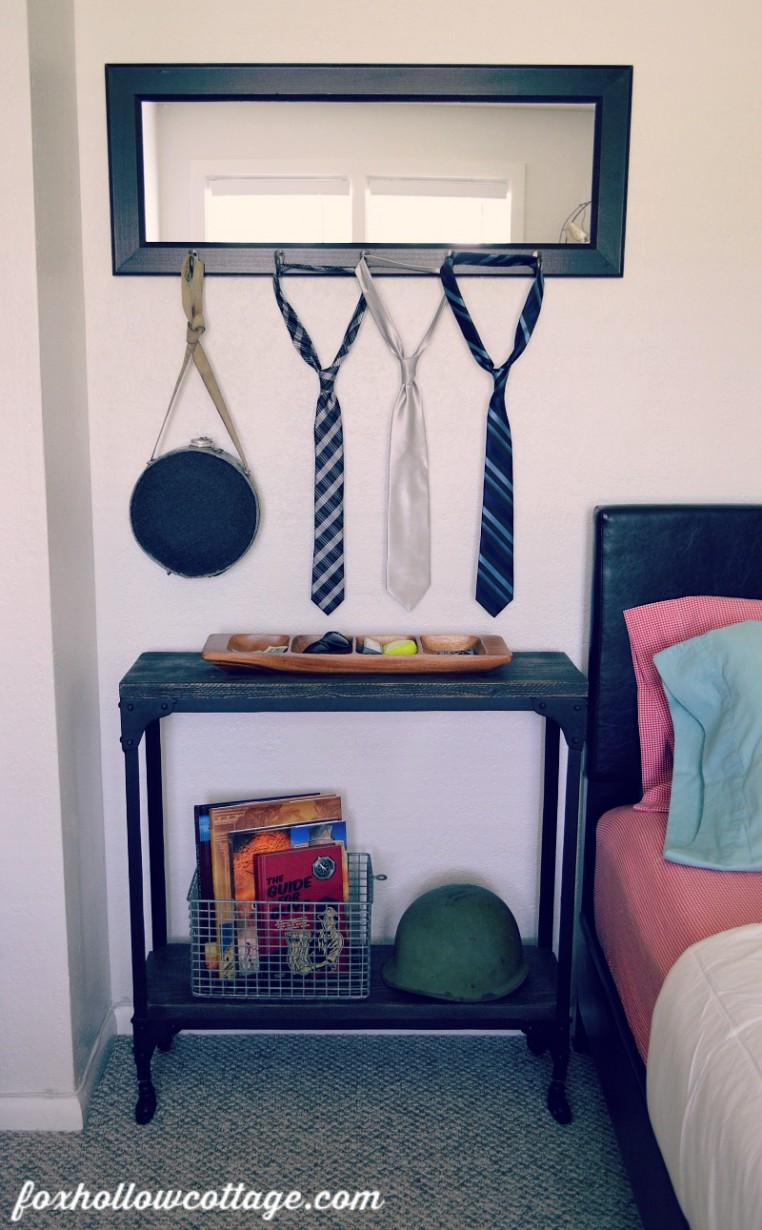 Some of you know Austin is in band.

Anyhow, he wears ties on a regular basis and needed somewhere to hang them.

Somewhere easy, where he could grab them quickly when running out the door.

This works and he can do a last minute “hair check” too.

We found a great dough bowel style piece for the top to catch all the loose stuff that can really clutter up a room! Well, I found it and he approved. He’ll take anything he can throw more junk in. 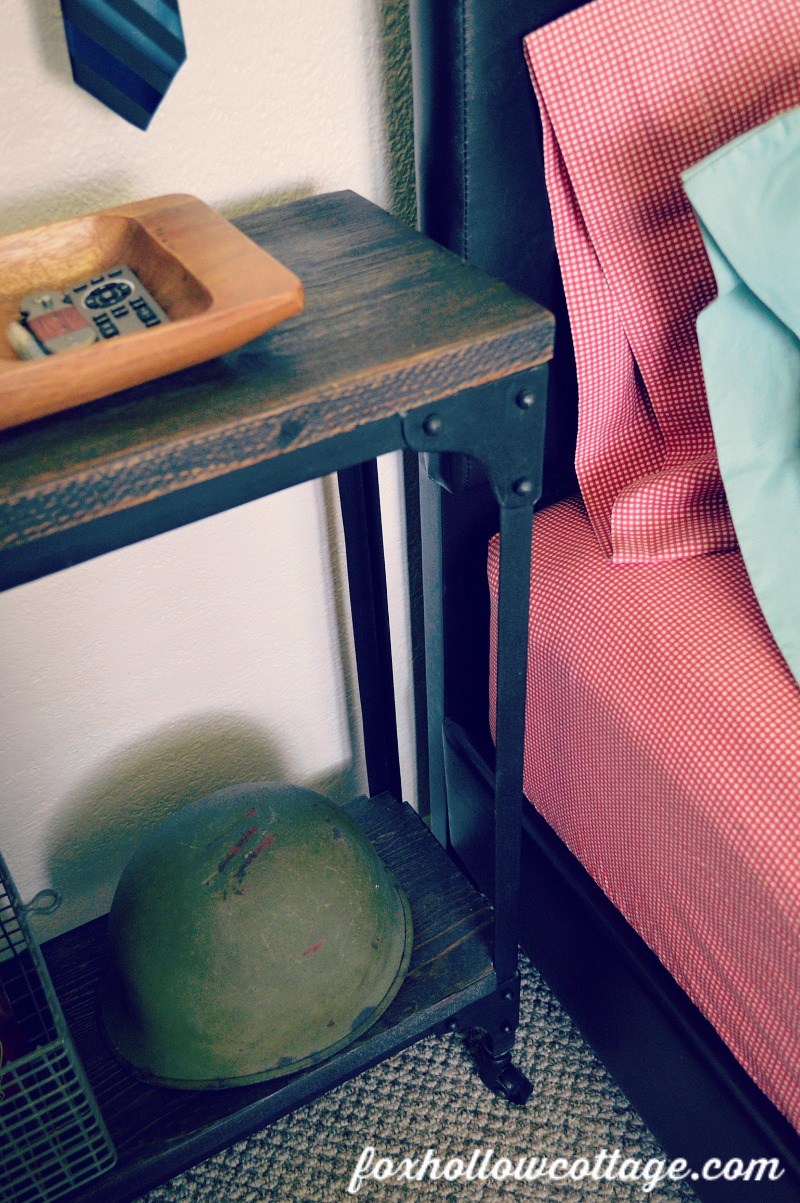 We love this table. It’s rugged and has a great industrial feel with the cast iron wheels and the aged shelves. The best part is that it’s really slim and the perfect fit on this wall that bumps out ever so slightly. It acts as a night stand and is just big enough to hold a drink, book or iphone within easy reach on top and offer additional storage on the bottom.

Just a quick visit back to the bed: It’s got a sturdy, padded headboard as well. My loungey boy loves this feature! 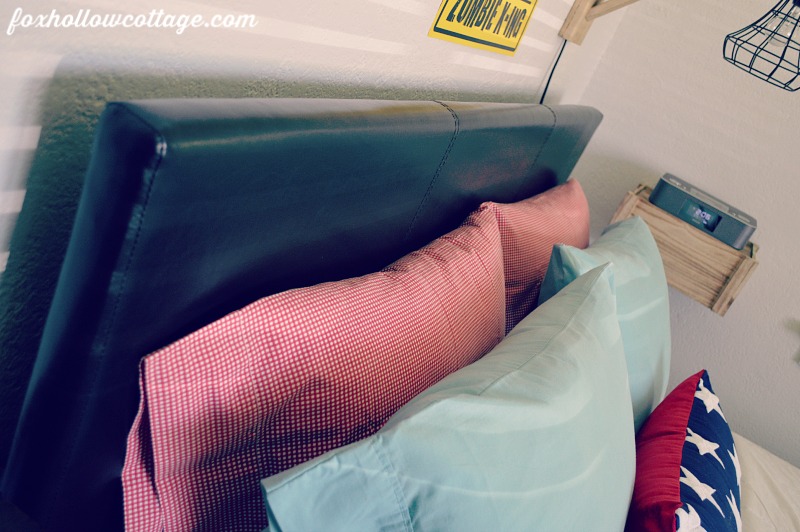 Back to that ,”more places to throw junk”.. this room has a built in feature.

This door hides a bunch of shelves.

Because it has a door.

So I don’t have to see bunches of loose, messy, stuff. 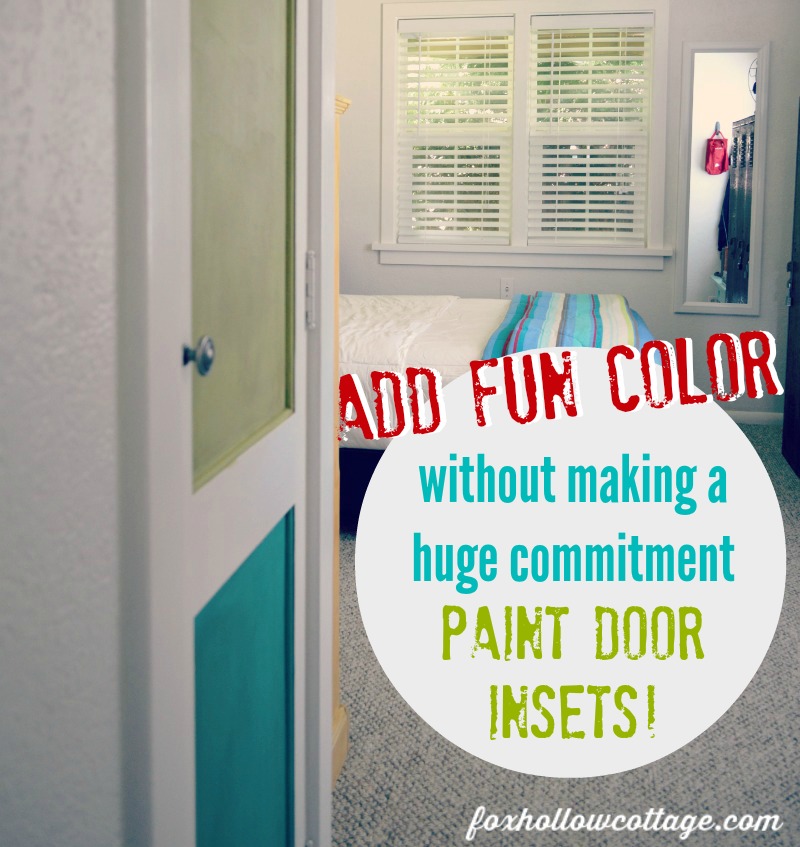 I thought it would be fun to pull a few colors from the comforter to jazz things up a bit.

Neither Jim nor Austin were feeling it.

Boys and girls are sooooo different.

Adding my wisdom here, in case you didn’t know that yet.

This is where the PART ONE comes into play.

Austin is very appreciative of his new room and thankful and all that good stuff!! However, there were a few changes mid-makeover… like finding washed out Army green lockers that did not go with the bedding I had picked out or the coastal/rustic-industrial look that we were set on, that sort of threw things out of whack. I worked with a make-due comforter instead and painted a few things in the room based on that. Turns out that was not a great idea and I’ve promised to un “girly color” the door insets I painted and the wall hanger for the cage light too.

We need a comforter but we’re having the hardest time finding the just right combination of something masculine, but soft and not too heavy.

I still want to do something really neat over the bed but I can’t force it, and it hasn’t come to me yet. We got a cool idea for the lockers last weekend! We just need a chance to implement it. Also, without knowing what color would be best, I’ve held off on painting the entertainment armoire as well. I don’t mind painting the door insets or the light hanger, but it’s large and I am not painting that sucker twice!!

I was a little nervous to post the AFTER for this makeover.

Knowing things weren’t perfectly completed like I wanted them to be.

But you know.. just because I write a blog does not make my home adventures any different than yours. Unless you are perfect and your rooms fall together like magic. I’m guessing that at times, and for the rest of us, there are hurdles and hiccups.

PS: It was a pleasure sharing this with you! 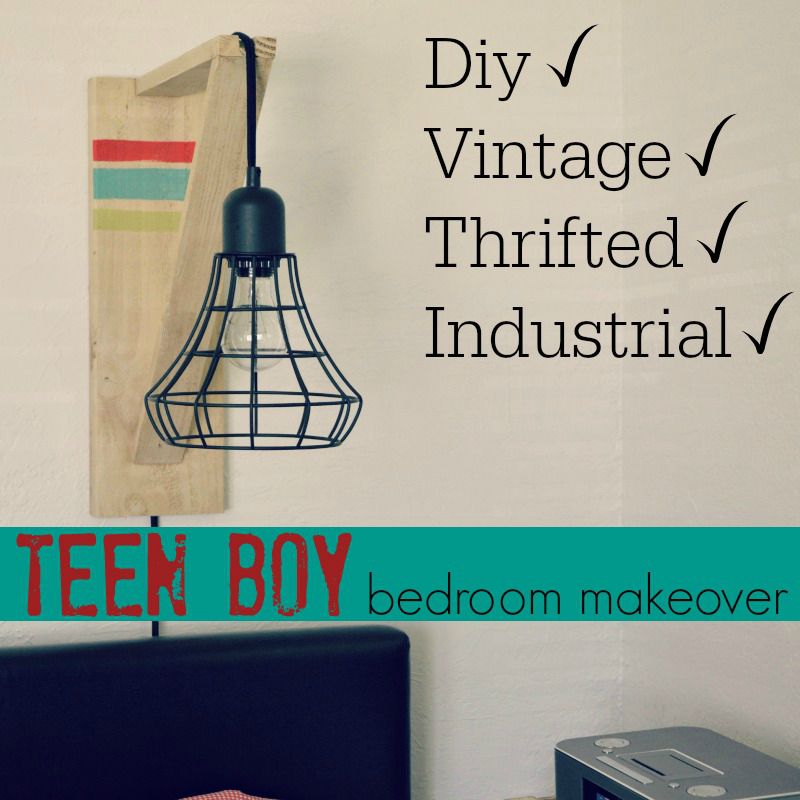